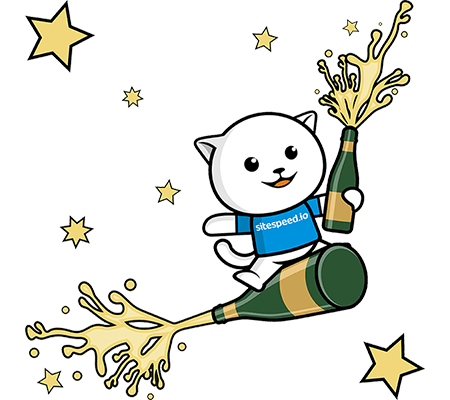 Yes we have finally released 4.0. We (Peter/Tobias/Jonathan and contributors) have been working extremely hard the last year to make it happen. Actually we started to think about the new version when we released 3.0 December 2014. So it’s almost 2 years in the making. It has been a long ride.

Before reading, you should just try it out:

When we started 4.0 there was a couple of things that we wanted to fix:

What we have accomplished in the last year

We released four new Open Source performance tools. Yep four. Lets talk about them and then get into what we’ve done with sitespeed.io.

YSlow is dead, long live the Coach! The coach helps you find performance problems on your page and gives you advice of what you can do better. We use the coach in sitespeed.io, but what’s extra cool is that it can be used by any tool.

The coach gives you advice on how to make your page faster. The coach aims to NEVER give you bad advice. If the world changes, the coach changes. No more wrong rules, instead the right advice. :)

The coach knows about more than just performance: Accessibility and web best practice are other things that the coach can help you with. We need you to help us make that part better (we are performance nerds).

What’s really cool with the coach is that you can integrate it into your own web performance tool. It’s easy: your tool only need to be able to run JavaScript in the browser and produce a HAR file. If your tool doesn’t handle that you can use the built-in functionality of the coach to run the browser.

Full respect for the HAR format, but it is not readable for a human eye. We wanted to take a HAR file and convert it to something that says something about a page, that’s make it easier for tools and human to understand. We ended up with PageXray.

If you have a HAR, run it through the xray and you will get a simple JSON structure of the page where you can see things such as number of assets per content type, transfer/contentSizes, the redirect chain and much more. Check it out!

Browsertime has been around since sitespeed.io 2.0, but now it has been totally rewritten to get rid of the async hell. :) Browsertime uses Selenium to start a browser, go to a URL, executes Javascript to collect metrics, and creates a HAR file.

The new version is still in 1.0 beta and soon we hope to release the final version.

Lets talk about all the new and shiny things in 4.0. The new version uses the Coach, PageXray and Browsertime. Together we get:

Everything in the new version is a plugin! You can add/remove/create your own plugin. A plugin can run additional tests on a URL or handle the result, like storing it to a database. You can also publish your plugins to npm. Just let us know about your plugin, so we can tell the world.

YES we finally support HTTP/2! The coach will give different advice if your page is using http/1 or 2. We have nothing in the way (ready proxy) that messes with the connection between the browser and the server.

We have a super great HAR files. For Firefox we use the HAR Export Trigger to generate the HAR file inside of Firefox.

To get the HAR from Chrome we parses the event log to generate it. Tobias spent some time to make that happen. :)

Are you prepared? In the new version you can login your user using a Selenium script! Yes that is true. You customize your own script to run pre and post testing a URL. Check out the documentation.

You can drive your Android phone and test pages using Chrome. You will get an HAR file and it will run all the javascript and collect the metrics.

We already got some really cool PRs for 4.0. Moos added support in Browsertime to log number of requests and some timing metrics. When you sit down and go through the logs from sitespeed.io you will see log entries like:

If you are used to just browsing through the logs, this adds some real extra value.

We have changed the key structure of the keys in Graphite. Yes that means you will need to redo your dashboards, BUT we did it because we wanted to support generic dashboards. You can share dashboards between project/sites. We also created a couple of default ones for you.

Well almost 2 seconds :) Using our new Docker compose script and ready made dashboards you can get it up and running as fast as the containers are downloaded. We also worked to get the Graphite key structure re-usable between web sites, so it’s easy to share dashboards.

That’s all you need. In production you should do some tweaks, read more about that here.

There are a lot of new things, just try out 4.0 and you will see. Or go to the documentation.

We hoped we could solve everything but … well it didn’t work out. A couple of things that we would like to add in the near future:

What’s been the hardest part doing 4.0? Things that we cannot control or do not plan to make a part of sitespeed.io.

Hehe that’s going to take some time! We will continue to work on 4.0 for a while to implement the things we missed, fixing bugs, and we would love your help!

The next couple of days we will be doing cleanup and remove old issues, old projects, and try to get a fresh start.

See you soon in the issues!