Some people say we release sitespeed.io too often. That is partly true. We release often, but we don’t release too often :) We’ve been releasing new functions as they are completed for the last 4.5 years (sitespeed.io will turn 5 years in October!). We’ve had some bugs, but we have worked out a system where we usually discover them before we release.

If you have trouble keeping track on when we update and release, please follow us on Twitter. We always tweet about the new release and if there are a serious bug fix we will highlight that.

With all that said let us go back in time and see how we did things from the beginning.

The first years I was doing the development by myself and getting very few PRs. Keeping the bug level low was simply a matter of how much time I spent testing most use cases before each release. It worked ok, I had a list of URLs in a shell script that I manually started before each release to check that they worked, some bugs were found before the release, and some later on. It worked fairly well for the code base at that time.

We are a three member team, with more PRs (but we want even more!), and a larger code base since we have five web performance tools that we built. We needed to have a more automated setup today to be able to release often.

Let us show exactly what happens when we push code: 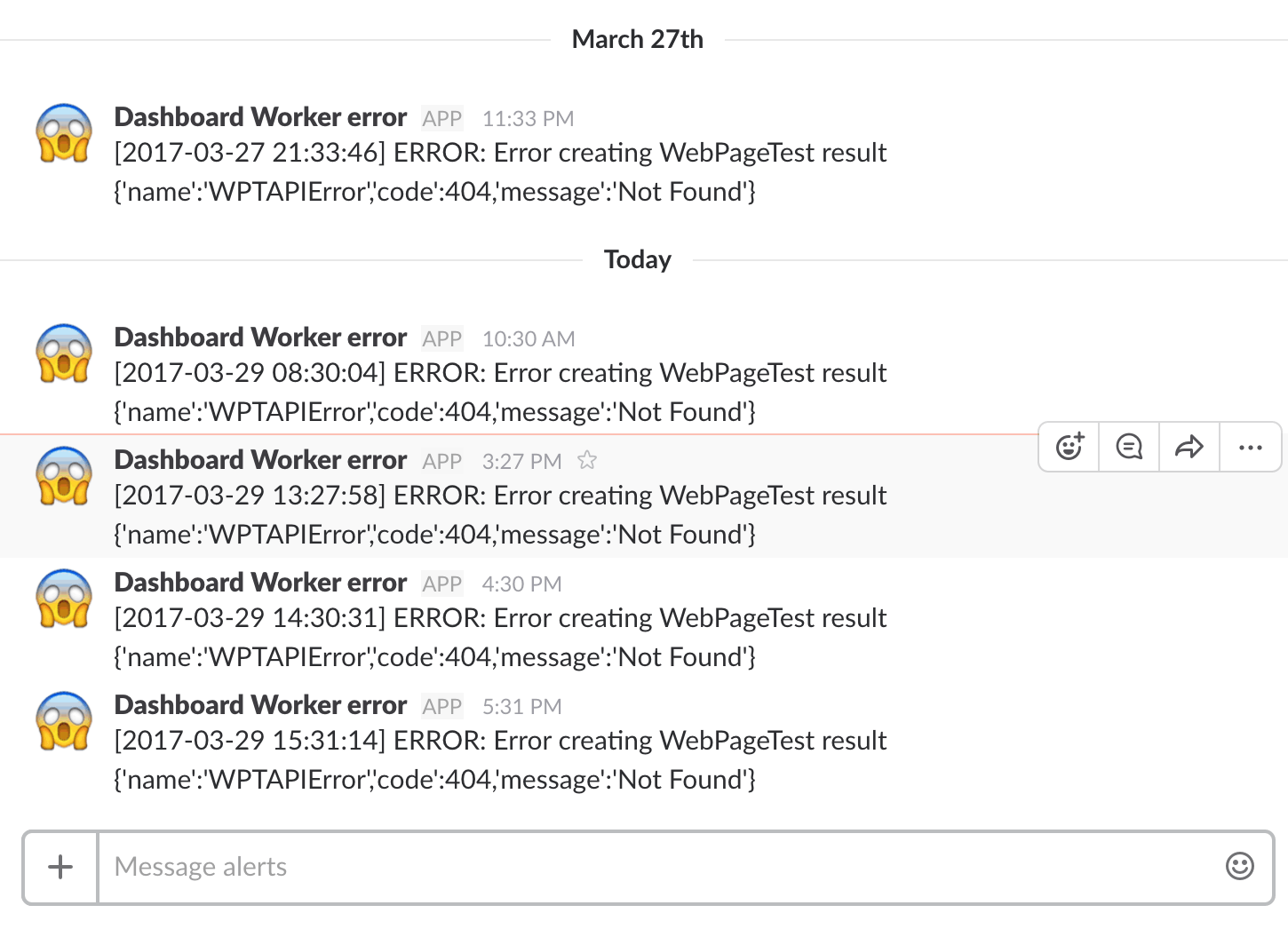 We still need to do some small tweaks in our WebPageTest integration before we do the next release!

We use Digital Ocean to run dashboard.sitespeed.io (Graphite/Grafana on one server and another server running sitespeed.io). From there we run sitespeed.io with the setup described here. We test 20+ URLs every hour:

You can checkout the result on dashboard.sitespeed.io and by clicking the runs checkbox you can access the HTML result pages served by S3. The code that generates these metrics are always the latest commits. You can always check yourself how we are doing :) 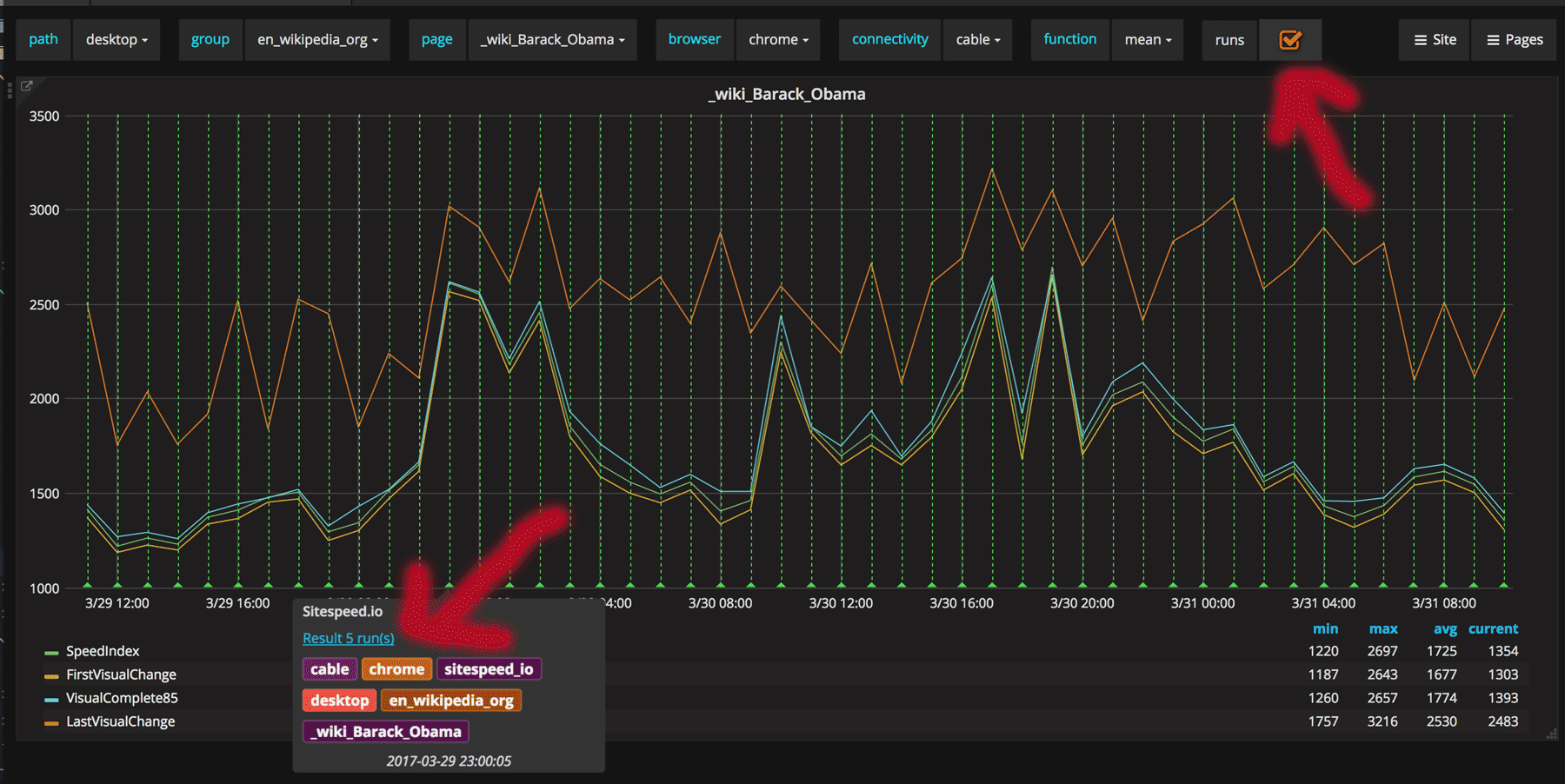 Go from Grafana to the HTML result uploaded in S3.

Having a server continuously running the latest code, pushing the metrics to Graphite has worked out really well for us. It’s easy to inspect the result pages at S3. And getting alerted when we have an error in the logs is just awesome. This really lowers the barrier for us to know if something fails.

When we release (= a new version to npm and a new tag to the Docker hub) we use this super simple release script. Before we release we always let the latest code run for a while on our test server and wait for errors on our Slack channel. We also manually browse the logs before a release and verify the HTML result pages on S3.

How you should upgrade sitespeed.io #

If you use Docker (and you should) make sure that you run a tagged versions and by tag we don’t mean latest. Pull by setting the version number just like this:

When you upgrade, read the changelog and Docker pull the new version and then change your run script/yml file (or whatever you use to start sitespeed.io) so that it matches the new version number.

What can we do better #

We constantly trying to improve our releases process and making it as safe as possible. What can we do?

If you have ideas on how we can test better, please create an issue at GitHub or send us a tweet!

P.S We will soon release Browsertime 1.0 and sitespeed.io 5.0, it will be a blast!