All I want for Christmas is … 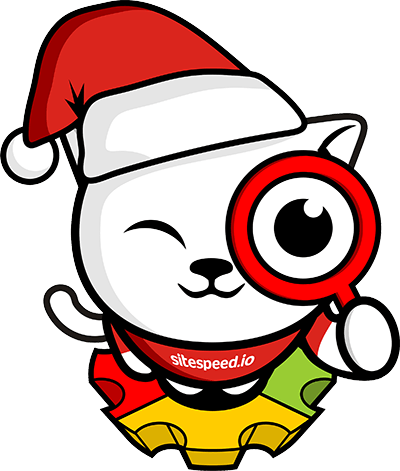 What really helps out is that if you find a bug or a potential bug, please follow the instructions on how to create a reproducible issue. That helps so much! If I can easily reproduce the bug, I can spend time on fixing them instead of spending hours trying to reproduce them.

… help from your company! #

If you work for a company that uses sitepeed.io, please make sure the company support sitespeed.io financially using https://opencollective.com/sitespeedio/contribute!

Let me explain why: Keeping sitespeed.io running cost money. To be able to catch bugs and regression before we do a new release we have two servers running to get the metrics for dashboard.sitespeed.io. At the moment the cost for that is $1700 per year.

Today we only have two monthly donors to the project: one secret contributor and Jesse Heady. Many many thanks to both of them. But we need more.

In the long run we want to have more servers for testing and also have automatic tests for our mobile phone setup. A couple of years ago I asked one of the companies that host mobile phones what we need to pay for five hosted phones. The price at that time was $22500 per year. That is pretty much money for an Open Source project :(

… help from the Chrome team! #

There’s a couple of open issues with Chrome that would make our work with sitespeed.io easier.

… help from the Firefox team! #

Its been super helpful when Mozilla started to use Browsertime for internal testing and the Mozilla performance team have contributed with so many new functionalities to Browsertime. However I still have one thing in my wish list:

… some love from the Safari team! #

There’s a couple of things I wish for Safari:

… and more love from GitLab #

I love that GitLab has used sitespeed.io since 2017 as their premium browser performance testing tool. I think though that the project lack some documentation since sometimes GitLab users ends up on the sitespeed.io Slack channel asking GitLab specific questions. As a user feel free to ask and I will answer as good as I can, but I think it would be beneficial for everyone with more documentation on the GitLab side.

Also since GitLab is a company valued over $11 billions I would really like to see you being one of the leaders of contributing to sitespeed.io :D Or maybe you are that secret contributor giving $20 each month? ;)

… that you all stay safe and have happy holidays! #